Lethal Liabilities: The Human Costs of Debt and Capital Flight 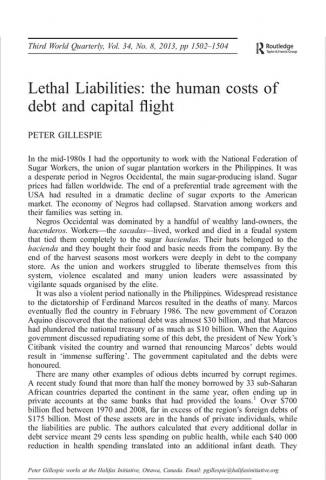 In the mid-1980s, I had the opportunity to work with the National Federation of Sugar Workers, the union of sugar plantation workers in the Philippines. It was a desperate period in Negros Occidental, the main sugar producing island. Sugar prices had fallen worldwide. The end of a preferential trade agreement with the United States resulted in a dramatic decline of sugar exports to the American market. The economy of Negros collapsed.  Starvation among workers and their families set in.

Negros Occidental was dominated by a handful of wealthy land-owners, the hacenderos.  Workers - the sacadas - lived, worked and died in a feudal system that tied them completely to the sugar haciendas.  Their huts belonged to the hacienda and they bought their food and basic needs from the company.  By the end of the harvest seasons, most workers were deeply in debt to the company store. As the union and workers struggled to liberate themselves from this system, violence escalated and many union leaders were assassinated by vigilante squads organized by the elite.

It was also a violent period nationally in the Philippines.  Widespread resistance to the dictatorship of Ferdinand Marcos resulted in the deaths of many. Marcos eventually fled the country in February 1986. The new government of Corazon Aquino discovered the national debt was almost $30 billion, and that Marcos had plundered the national treasury of as much as $10 billion.  When the Aquino government discussed repudiating some of this debt, the president of New York’s Citibank visited the country and warned that renouncing Marcos’ debts would result in “immense suffering.”  The government capitulated and the debts were honoured.

There are many other examples of odious debts incurred by corrupt regimes. A recent study found that more than half of the money borrowed by 33 sub-Saharan African countries departed the continent in the same year, often ending up in private accounts at the same banks that provided the loans.   Over $700 billion fled between 1970 and 2008, far in excess of the region’s foreign debts of $175 billion. Most of these assets are in the hands of private individuals, while the liabilities are public. The authors calculated that every additional dollar in debt service means 29 cents less spending on public health and each $40,000 reduction in health spending translates into an additional infant death. They estimated that debt service payments on loans that fueled capital flight have resulted in more than 75,000 additional infant deaths annually in the sub-Saharan region.

The relationship between debt and capital flight is a vicious cycle.  As countries borrowed more, capital flight accelerated as corrupt politicians and officials diverted loans offshore.  As James Henry pointed out, foreign loans in the 1970s and 1980s, produced “the largest tidal wave of capital flight in history ...”   By the 1990s, flight capital exceeded the value of all Third World foreign debt.  By 2010, private elites in 139 low-middle income countries had accumulated $7.3 trillion to $9.3 trillion in untaxed offshore wealth, an amount substantially greater than the aggregate external debt of these countries.  As a result, these countries are losing tax revenues of at least $200 billion a year and many are incurring more debt to compensate.

The Tax Justice Network (TJN) is leading an international NGO campaign advocating the curtailment of offshore secrecy jurisdictions, and an end to banking secrecy and tax evasion.  As TJN noted, “as corrupt dictators and other elites strip their countries’ financial assets and relocate them to these offshore financial centres, developing countries’ economies are deprived of local investment capital and their governments denied desperately needed tax revenues.”

NGOs are also campaigning for the adoption of new debt work out procedures that level the playing field between debtors and creditors.  Debt negotiations are always biased towards lenders’ interests. The impact of illegitimate or unsustainable debts on human lives is rarely considered in debt disputes; creditors decide which countries are eligible for debt cancellation or restructuring, and on what terms. EURODAD, the network of European NGOs, has proposed a set of principles for the fair and transparent resolution of sovereign debt problems.  EURODAD is calling for the development of an independent and impartial body, perhaps under the aegis of the United Nations, to adjudicate disputes between lenders and debtors.

There are promising signs that new approaches to debt resolution may be on the international agenda.  In 2012, UNCTAD launched its “Principles on Responsible Lending and Borrowing.”  UN Independent Expert Cephas Lumina recently released “Guiding Principles on Foreign Debt and Human Rights.” In August 2012, the Norwegian government announced that it will assess the legitimacy of developing countries’ debt to Norway, the first time a Northern government will conduct a creditor’s debt audit.

All this may seem a long way from the odious debts incurred by the Marcos dictatorship.  Today however, the Philippines is carrying a crippling external debt of $60 billion, much of it the legacy of the dictatorship era. This is also the case for dozens of other countries where the lives of current and future generations are impaired by debts that did not serve their interests. Resolution of these issues is long overdue.

Tax revenues in both Northern and the Southern countries are being eroded largely due to tax evasion by multinational corporations. We promote improved financial transparency, reform of global tax rules, and tax compliance as corporate and government accountability issues. See also, our Tax Justice Resource List.