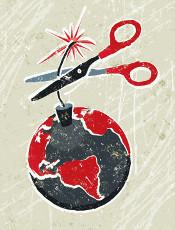 Climate Challenges & Climate Finance
At the 2010 UN Climate Summit in Cancun, agreement was reached to establish a “Green Climate Fund” (GCF) to reduce climate vulnerability in developing countries. A transitional committee met throughout 2011 to design the fund and presented its recommendations at the 2011 climate summit in Durban. The first meeting of the GCF Board will be held this year. The World Bank has been appointed as the interim trustee of the fund for a period of three years.

CSOs have expressed serious reservations about the role of the World Bank and affiliated multilateral development institutions. Civil society has called for a global fund that is both accountable and representative in order to meet the needs of those most vulnerable to climate change. The trustee role of the World Bank means that the GCF is in danger of replicating the donor-recipient relationships characteristic of an aid industry dominated by donor countries and international financial institutions.

The World Bank is already heavily involved in climate finance. For example, the Bank manages the Climate Investment Funds (CIF), a multi-billion dollar fund to support climate resilient activities in middle and low-income countries. CSOs have raised a host of concerns about the CIF (see page 2). Moreover, CSOs have noted the contradiction between the Bank’s professed commitment to environmental stewardship while continuing to finance massive coal-based energy projects in places such as South Africa and Kosovo.

CSOs and many developing countries have a vision of the Green Climate Fund as a new approach to North-South relations based on equality, interdependence, common interest, and cooperation. The climate crisis is deepening and global agreements on remedial actions have been difficult to achieve. The development of a well-financed and democratically-governed Green Climate Fund, based on the above principles, would be a significant step in the right direction.

Overview: The Climate Investment Funds
The Climate Investment Funds (CIFs) are administered by a secretariat at the World Bank and the funds channeled through multilateral development institutions (MDBs). CIF projects are often integrated into and co-financed by existing MDB country programs. Donor countries, including Canada, have pledged more than $6 billion to the CIFs.

The CIFs are comprised of the Clean Technology Fund (CTF) and the Strategic Climate Fund (SCF). The Clean Technology Fund (CTF) aims to finance scaled-up clean technologies and provide investment opportunities to reduce emissions in middle-income and fast-growing developing countries. The Strategic Climate Fund (SCF) supports the Forest Investment Program to reduce deforestation and forest degradation (REDD+); the Pilot Program for Climate Resilience provides grants and loans to assist in the development of climate resilient national plans; and the Scaling-up Renewable Energy Program in Low-Income Countries which aims to catalyze renewable energy investments.

Civil society organizations are critically monitoring the governance and the investment decisions of the Climate Investment Funds. Concerns include the following:

• Lack of country ownership. The role of Multilateral Development Banks as implementation agencies undermines country ownership of CIF programs. CSOs and developing countries have called for direct access to climate finance rather than funds being mediated through the MDBs or delivered to the private sector.

• Mitigation versus adaptation. More than 80 percent of CIF funds have been allocated to mitigation activities and only 13 percent to adaptation. CSOs have advocated that at least half of all finance should be dedicated to initiatives that build adaptive capacity among the most vulnerable people.

• Grants versus loans. CSOs have been deeply critical of the overwhelming use of loans rather than grants in the program.

• Reaching the most vulnerable. CIF allocations have disproportionately favoured middle income countries rather than the poorest and most vulnerable. The CIF has also been criticized for not integrating a gender analysis into project activities.

• Participation. The engagement of affected communities and civil society groups in the design and delivery of CIF projects has been very limited and in some cases non- existent.

Given these concerns, CSOs are opposed to the CIFs as a model for the Green Climate Fund.

A Faulty Model? What the Green Climate Fund Can Learn from the Climate Investment Funds
www.brettonwoodsproject.org/doc/afaultymodel.pdf

Recommendations for the Transitional Committee, July 2011, Friends of the Earth, USA
http://www.foe.org/publications/advocacy-outreach?page=2

Crown Corporation in the Carbon Game
The Canadian government funds carbon-based energy generation, including massive coal projects, through the World Bank. It also finances greenhouse-gas emitters via Export Development Canada (EDC). In 2011, the Crown corporation facilitated over $9 billion worth of business in the oil and gas sectors. In 2010, EDC supported nine ‘Category A’ projects – those investments most likely to have significant adverse environmental impacts. Three of the nine projects financed by the corporation involved activity in the coal, oil or gas industries.

Postmortem: Rio + 20
Given the global economic and environmental crises, there were high expectations of the Rio+20 sustainable development summit this month in Brazil. The summit, however, ended in widespread disappointment as governments were unable to agree on decisive actions.

While the final declaration acknowledged climate change as a “persistent crisis,” there was no mention of ending fossil fuel subsidies or any financial commitments to the Green Climate Fund. There was no progress of food security. Canada, the US and Russia blocked attempts to protect the biodiversity of the world’s oceans. Despite determined advocacy for the inclusion of women’s reproductive rights as a key element of sustainable development, the opposition of the Vatican and others prevailed.

While there were no breakthroughs, there were a few modest successes. After a great deal of bickering between Northern and Southern countries, the final outcome document reaffirmed the Rio principles agreed in 1992, particularly the principle of “common but differentiated responsibilities” (CBDR). This was a victory for developing country negotiators since CBDR, the foundation for action on climate change, was rejected at the 2011 Durban climate change summit.

Guiding Principles on Debt and Human Rights: Report of the Independent Expert on the effects of foreign debt on the full enjoyment of all human rights, Cephas Lumina.
http:// daccess-dds-ny.un.org/doc/UNDOC/GEN/G12/128/80/PDF/G1212880.pdf?OpenElement

Under the Copenhagen Accord commitment, Canada pledged $1.2 billion in climate change finance to support developing countries in mitigation and adaptation activities. The table below summarizes the geographic distribution and nature of these funds as of May 2012.*

Canada’s largest contribution to fast-start climate financing is concessional lending to developing countries or private sector entities through multilateral financial institutions. The above numbers include funds for the International Development Research Centre for adaptation research, $250 million in concessional finance for private sector initiatives in the Americas, and $292 million to the International Finance Corporation of the World Bank Group to support private sector clean energy projects in developing countries.

Canadian priorities emphasize mitigation projects, especially in partnership with the private sector, while financing for adaptation initiatives represents a very small proportion of overall contributions. Canada has not given any indication of its commitments to climate change finance after 2012.